Did you miss me?

You can thank my sister for this post. I have been feeling dramatically uninspired of late, hence the radio silence. And then my sister sent me a lovely email, which included a link to one of my blog posts from 4 years ago, about her trip to Iceland. And somehow it’s inspired me.

There’s alot of change afoot in the stationery/fountain pen world. Wonderpens have closed one shop and opened another; I so love their blog I felt I was saying goodbye too, even though I’ve never set foot in any of their stores to date. Matt Armstrong of The Pen Habit on YouTube has ended his run as fountain pen/ink reviewer extraordinaire. Believe me, I can relate. I seriously considered shutting this whole thing down. Even Mary at From the Pen Cup took a long breather between posts. I’ve set myself the challenge of 53 posts this year, which may or may not happen. And I’ve decided to be at peace with that.

So inspired by my sister I’m going to review the Lamy Al-Star Pacific 2017 Limited Edition fountain pen she gave me for my birthday last year. 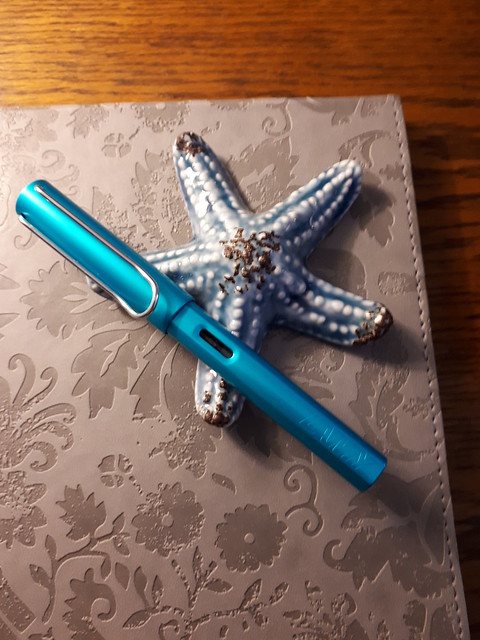 It’s my third Lamy; I’ve written about the Safari and my other Al-Star previously. The Safari was one of my first purchases after starting the blog, back in 2012. And the Al-Star was a Christmas present in 2014. This Lamy Al-Star is a gorgeous turquoise blue, called the Pacific, for the colour resembles tropical seas. 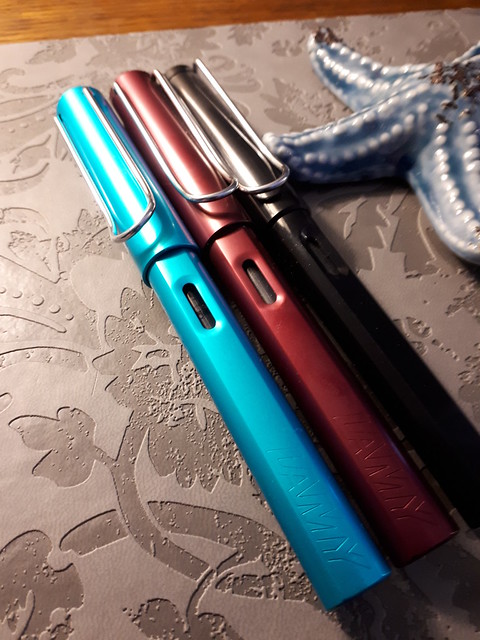 I also received a bottle of Lamy Turquoise. It was released with the special edition pen but as far as I can tell it’s the same colour as the old Lamy Turquoise. Either way it’s a glorious colour. 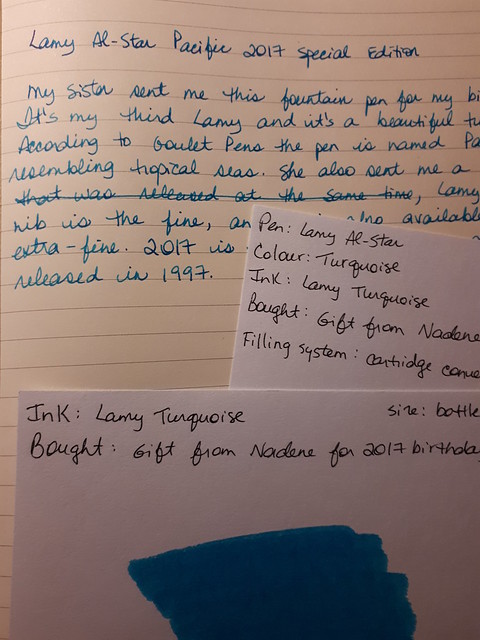 The nib is fine and very smooth. Since last September I’ve had it inked up with the Lamy Turquoise, and it always starts writing the instant the cap comes off, with no skipping or hard starts. The cap posts securely although I would advise caution with posting, as my purple Al-Star is showing signs of wear on the barrel. 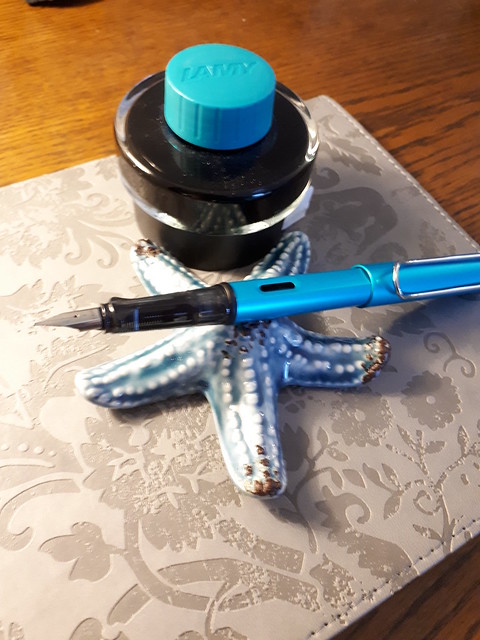 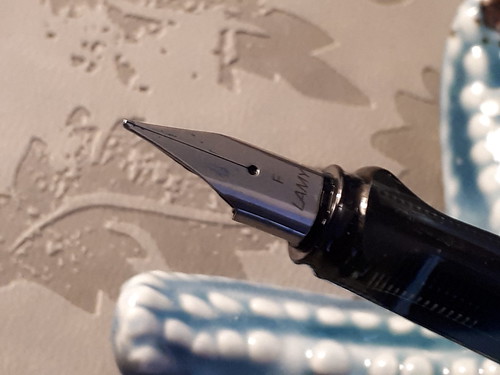 The Al-Star usually retails for just under $40 US. The 2017 special edition is no longer available on Goulet Pens; indeed it has been replaced by the 2018 special edition in Vibrant Pink. I’m told the Al-Star Blue Green is very close in tone to the Pacific. But I did manage to find two on offer on Amazon as used. I highly recommend the Lamy Al-Star, for beginners and pros alike. These special editions are a fun way to expand your Lamy collection – such colours!

And finally today (in North America) is the day we honour our mothers. Today marks my 18th Mother’s Day without mine. I wish I could say it gets easier. But some years are better than others. I have a wonderful mother-in-law who receives our well wishes via video call. And now that I’m back in Nova Scotia I can visit my grandmother’s grave, and honour her memory along with her daughter’s.

Happy Fountain Pen Day to me. 🙂

About a week before Fountain Pen Day I was watching The Pen Habit, Matt Armstrong’s YouTube channel, and he mentioned the Delta Journal. It was a super quick reference as he was reviewing a different pen, but my ears perked up. I had never, ever heard of a fountain pen called The Journal, and as the author of this blog I had to investigate. So yes the initial motivation was purely the name but ultimately the pen has proved to be so much more than that.

I started my research on YouTube and I couldn’t find any video reviews of this pen. (If you find one please let me know!) I couldn’t believe it. There are lots of Delta pen reviews, but none of The Journal specifically. So then I went to online retailers. Goldspot carries them, and so does Stilografica. I also found them at Giardino and Pen Chalet. All of them were around $320 US ($426 Cdn). [Note: when I was researching this pen earlier this month they were closer to the $500 Cdn mark.] I thought I would check ebay as well and the prices were considerably better. One of the sellers, Martemodena, had a lot of product and great reviews. So I decided to go straight to the source. Martemodena has their own website so I decided to order from them directly. They were offering this pen for $120 Cdn, which is quite a savings. And as I write this they are offering the pen for $102! I don’t mind, I couldn’t wait to get it so I paid the going price. But at that price maybe I need a second one……..!

The more reviews I read and the more pictures I saw of the pen the more I wanted it. The Journal was made to honour journalists and freedom of speech, which appeals to me as I took my undergraduate degree in Journalism.

I placed an order on Thursday and received the pen the following Wednesday.

The faux leather box. Almost there!

A stunning presentation. The box is lined in cream suede. Along with the pen there is a bottle of Delta ink (blue) and information cards, including the serial number (this pen collection has numbered editions), the date of inspection and the initials of the inspector, along with guarantee information (lifetime, with conditions) and filling instructions. This model is a cartridge converter-filled pen.

I chose the Pearl Red finish, which is red resin with green and grey flecks. Each pen is hand-made from Italian resin. The trimmings are rhodium plated, as is the nib. Delta offers a “fusion” nib which is gold and steel but I chose the rhodium plated steel. I don’t think the extra cost for the gold nib is warranted in these pens, as the gold doesn’t actually touch the paper, so the benefit is negligible, in my opinion.

Even though it came with ink I chose Harmonious Green by Waterman. Waterman is always safe and I wanted to match the barrel somewhat.

I forgot to take a picture but as I said previously this pen takes international cartridges but also comes with a cartridge converter. The converter actually has a steel top that is accessible from the bottom of the barrel. So it can be filled without unscrewing the barrel. It saves a few seconds but I usually unscrew the whole thing so I can see how much ink has flowed into the reservoir.

Here’s a closeup of the nib and that beautiful resin. I chose a medium, even though European mediums tend more toward broad than medium. But I didn’t want to risk a fine nib being too fine. This nib is perfect. Smooth with just a touch of toothiness. The nibs are available in Extra Fine, Fine, Medium, Broad and Stub.

This numbered edition is number 4768. I like how the name of the pen is inscribed on the cap.

And at the very top of the cap we see Delta Italy.

I did the writing sample above in my Executive Journal. No bleedthrough. Some ghosting. You can see how the line leans more broad than medium but I like that. It performed well on the Tomoe River paper in my Seven Seas writer as well. The pen arrived super quickly from Italy. They used DHL and what an informative website they have! I watched it go from Bologna, Italy to Leipzig, Germany, and then to Luton, UK and then to Heathrow, where it was put on a plane to Canada. Four business days from start to finish. Impressive.

The clip has a ball at the end, which turns, for ease of placing in a pocket, apparently. The section is just about 1 cm wide, which I love. The concave shape fits my hand perfectly. The pen is 13.5 cm long unposted. Even though I love to post I try not to do it with this pen, for fear of marking the resin on the barrel.

There is another version of this model, called The Journal Grande, which is much thicker, and the clip is different.

I am really pleased with this pen. I would recommend this pen or any Delta pen, as they are true artisans who are dedicated to perfection in their products. No complaints about Martemodena either; they packaged my pen perfectly and had it to me really fast. It’s very special to me, not just because of the name, but of what it represents as a tribute to free speech and journalists. 🙂

I really enjoyed watching Rhomany’s video on the Really Big Notebook from productiveluddite.com. I visited their website and they have some really great notebooks which they ship anywhere for free. And – if you buy a notebook they plant ten trees. How cool is that?

I watched SBRE Brown’s video called Time for Some Kind Words for the Pen Habit and it made me sad. Matt puts so much production value into his videos and it’s disheartening that negative voices on YouTube made him feel so bad about what he was doing. Be sure to read his touching blog post to get the full picture about why he is taking a hiatus from posting videos. I applaud him for taking control of his life.

And I know I tend to flog this idea to death, but here is yet another article from Ryman Blog on why writing by hand helps you to remember things and to study better and just to be a better person all round.

Until next time, happy writing!