I’ve been thinking for some time about changing the way I record the details of my pens and inks, as discussed in this post. I love having lots of room to write about each pen or ink, but inevitably I found the binder too large and heavy to be practical and portable. So I’ve made the move to index cards. 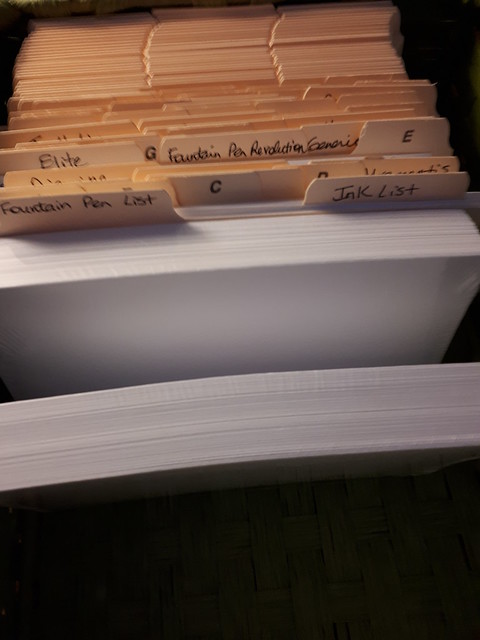 I’ve made a list of all the pens I have, as well as a list of all the inks. I’ve noted down the colour of pen, the size of bottle, where each was purchased and when. Then each pen and each ink has it’s own index card under the corresponding letter (J for Jinhao and D for Diamine). It’s compact and alphabetical. It’s still a work in progress as I haven’t found a proper file drawer for it; I would love to purchase a real library file drawer (with the steel rod and everything!!) but my budget doesn’t allow it at this time. I plan on doing a full post on it when it is finished.

But in working on transferring the contents of the binder to the cards I have found gaps in my inventory, and one such obvious gap is a set of inks I bought after the binder was set up but still packed away: 8 of the Diamine 150 Anniversary Inks. To mark the 150th anniversary of its brand, Diamine released 16 40 ml bottles in a unique triangular shape that, when arranged, form a beautiful carousel of ink. 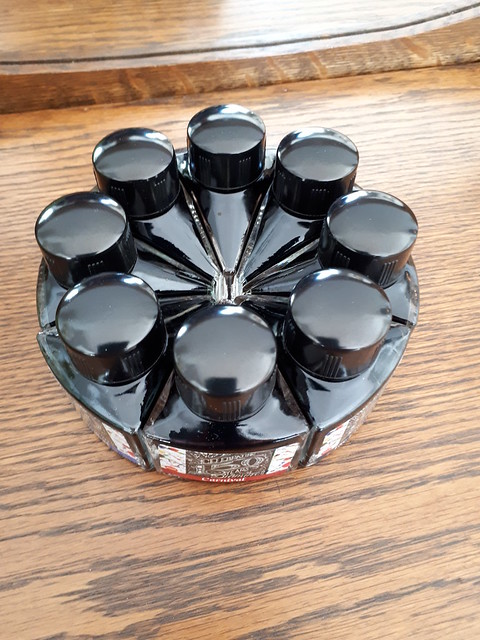 There are 16 colours in the anniversary line:

I have eight of these, and I actually didn’t realize there were eight more until I did the research for this post. I bought the set from WonderPens.ca and they gave me a deal because I bought a set of eight. Now that I know there are eight more, I might ask them if they would offer me the deal again! When I have a few pennies to spare maybe. You can buy them on the Wonderpens site for $15 each. 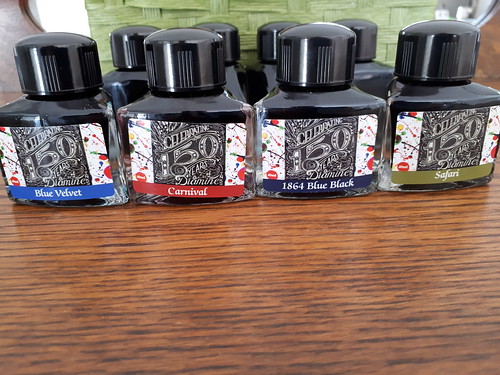 The labels are very distinctive, with the swirly 150 and the vintage feel. And the inks themselves, as with all Diamine inks, are bright and eye catching. 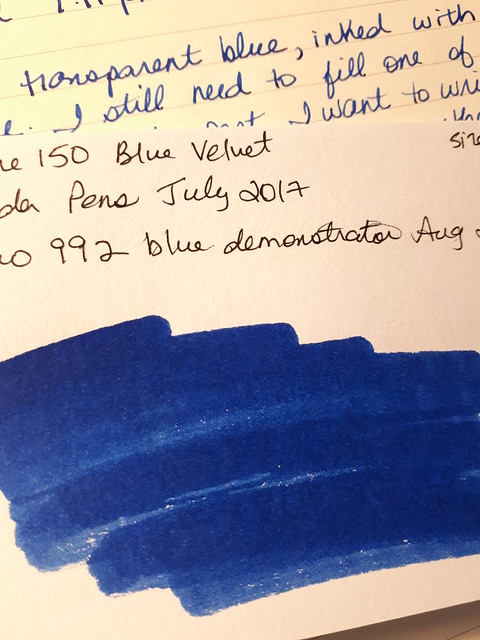 Here is the Blue Velvet. The blue handwriting in the photo above is from my journal, made with a Jinhao 992 pen inked with Blue Velvet. 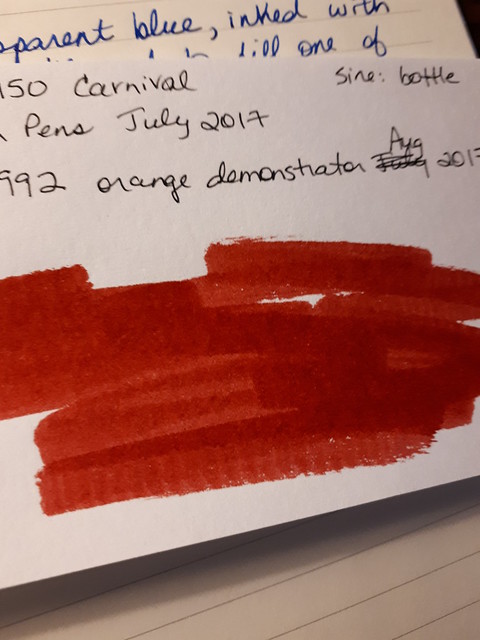 Here is Carnival, which is more of a true red than what is coming through in the photo. 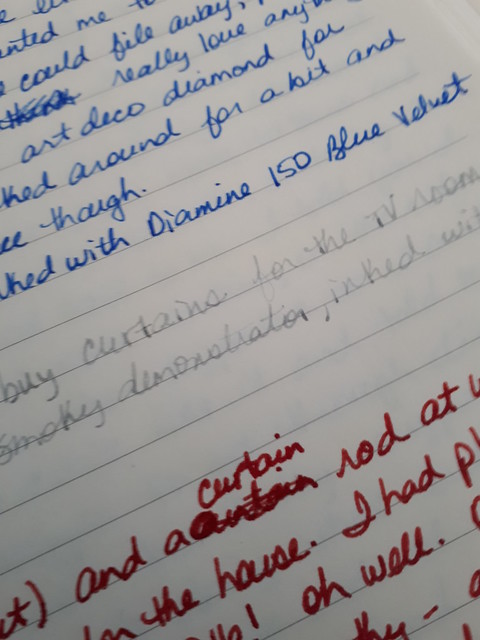 Here the red writing is in Carnival. 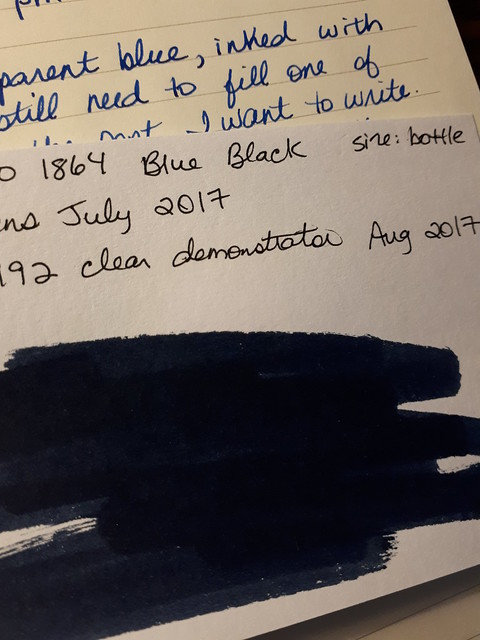 Here is the 1864 Blue Black above with a writing sample below. 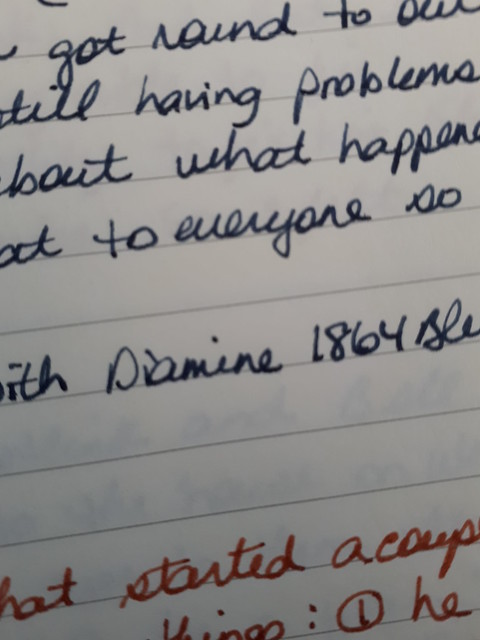 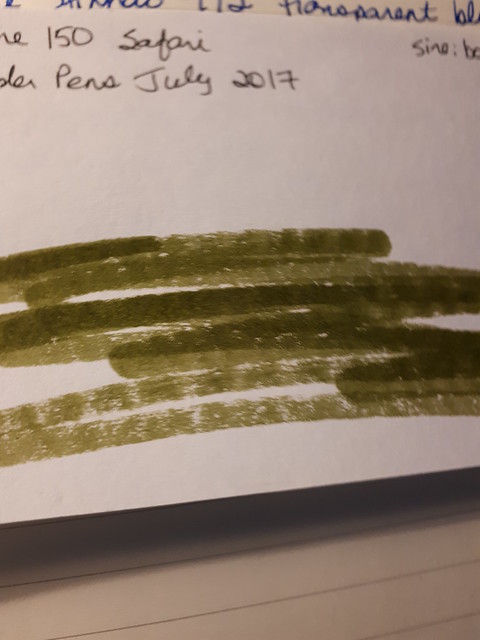 Above is the Safari green, with a writing sample below. 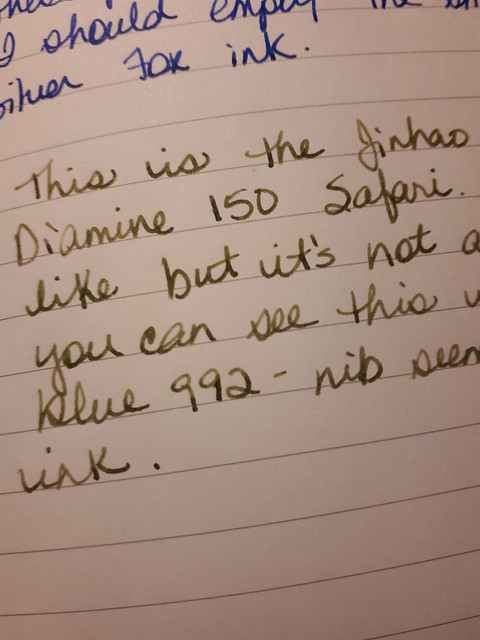 The next four inks. 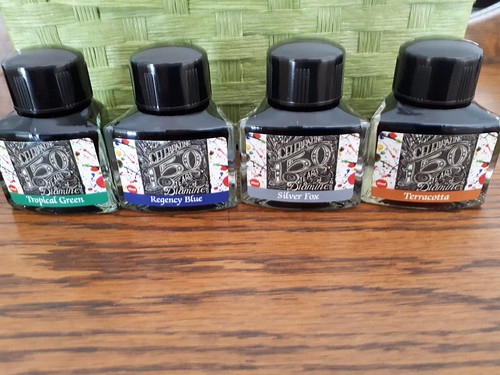 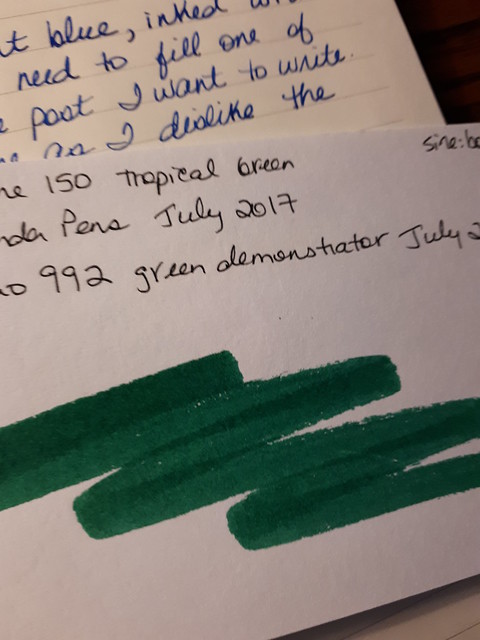 Here is the Tropical Green with a writing sample below. Love this green. 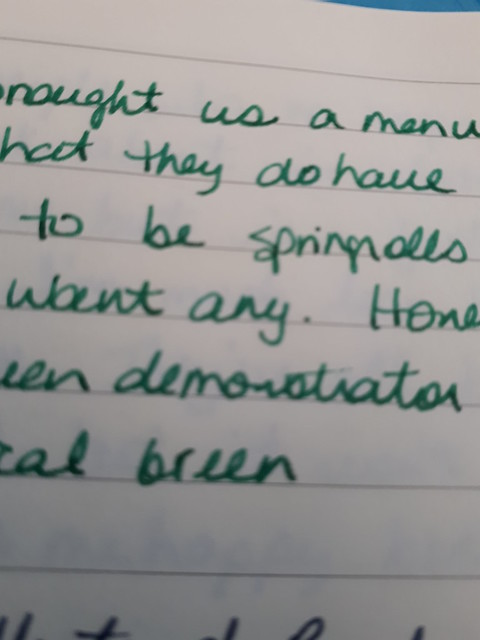 Here is the Regency Blue followed by a writing sample. I like all three but this is my favourite of the blue inks in this set. 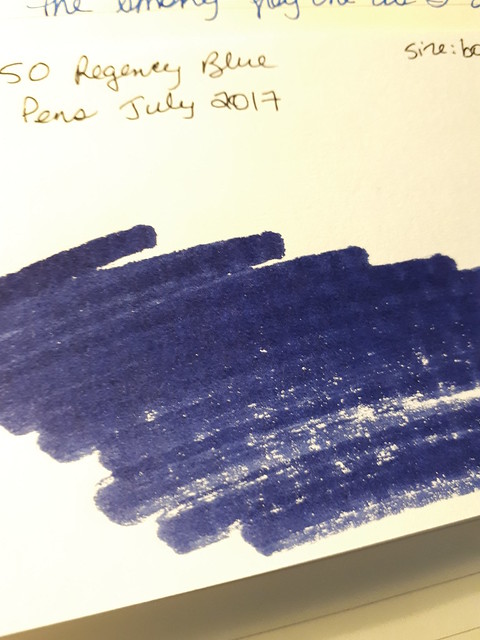 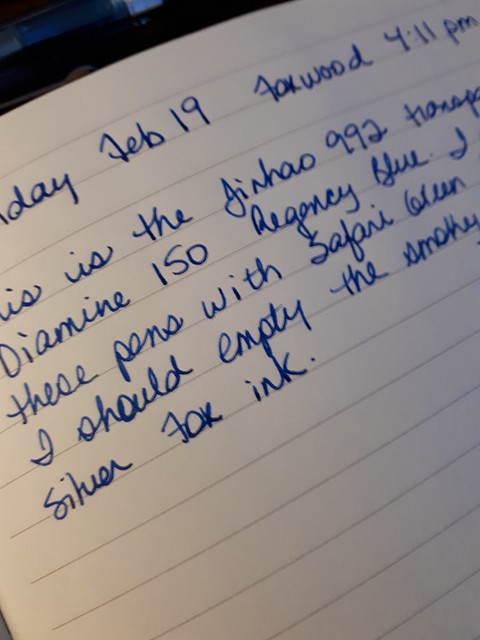 Here is the Silver Fox with a writing sample following. This is my least favourite of this set. I have never come across a grey ink that I like; they all seem to be too light. You can barely read this one. 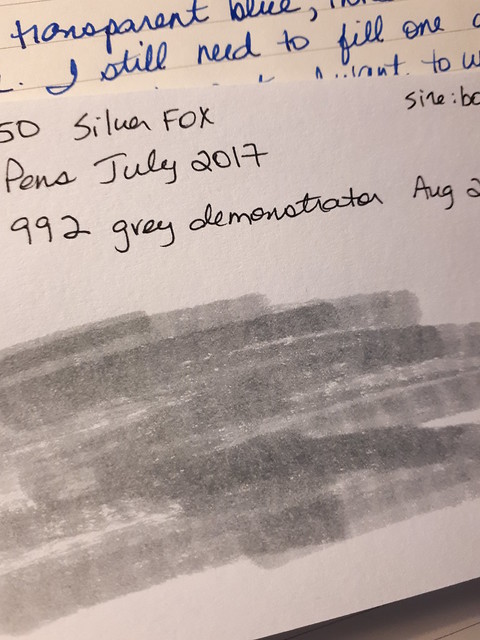 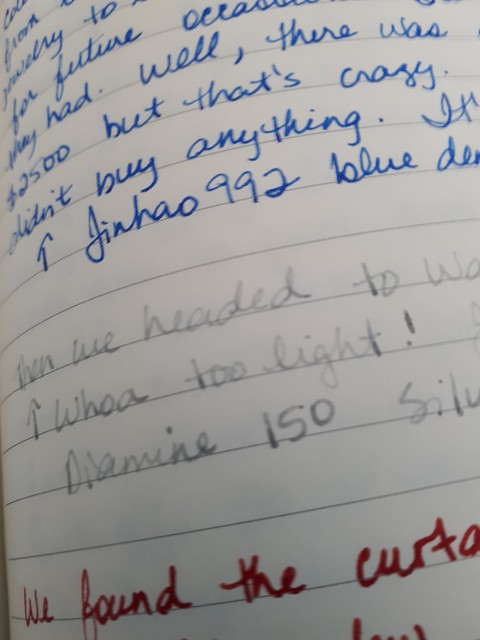 And finally here is the Terracotta, with the writing sample following. 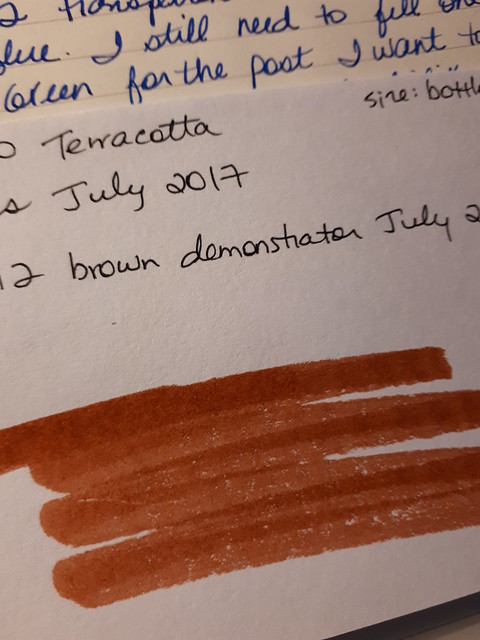 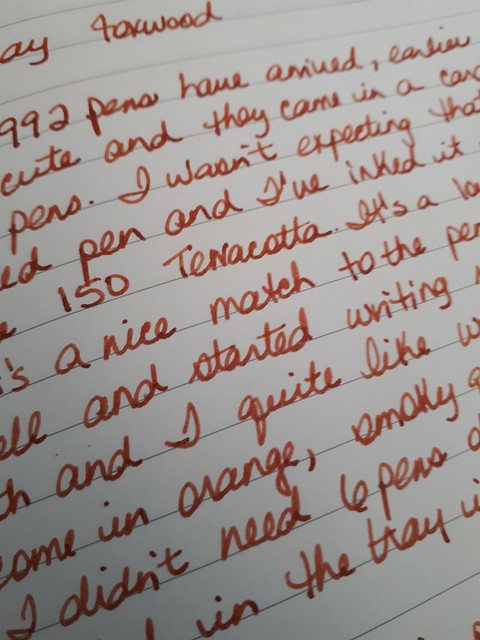 That’s it for the Diamine 150 inks, or at least half of them. 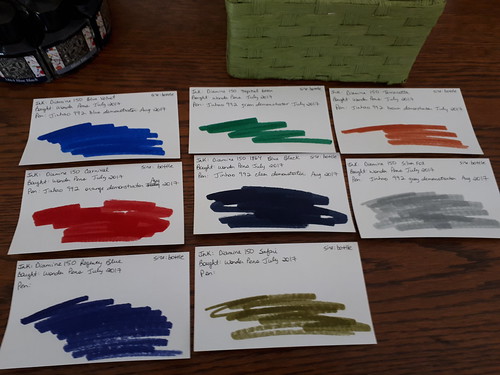 I also came across a few more new inks that need to be reviewed but this post is certainly long enough so I won’t inflict them on you. Yet.

A couple of random things for you today: I have two new bottles of ink and I have made some progress in my Wreck This Journal, and I thought I would share.

Yesterday we celebrated my sister’s birthday by going out for lunch and then shopping at Reid’s Stationers! (She actually loves the place too; I wasn’t being selfish!) We were on an ink mission of sorts and the staff were really wonderful and swabbed a bunch of inks for us. Diamine Matador Red is really amazing; think the red flags in a bull ring, or the colour of blood – vibrant and bright. And the Sailor Jentle inks are lovely; we looked at swabs from the Colors of Four Seasons collection. My sister settled on a bottle of Yama-Dori, which is a breathtaking turquoise. We both bought bottles of Waterman Inspired Blue, and I picked up a Harmonious Green as well.

I’ve said this before but buying French ink is like buying French perfume; I feel spoiled and fancy. And in comparison with other inks it is affordable; Reid’s sells Waterman for $11. And they sell Pilot Iroshizuku bottles for $40. I will probably buy a bottle of Iroshizuku one of these days but at that price you REALLY have to love the ink. I should buy some samples from Goulet before taking the plunge.

Anyway this morning I updated my ink journal and swabbed both of these. When we were comparing swabs at Reid’s yesterday I was struck by how bright the Waterman inks are. They swabbed the bottle of Waterman Audacious Red and I know I will never buy that ink. It’s too bright and pink for my taste. But I loved the blue and green.

The blue reminds me of Bleu Pervenche by J. Herbin, which I love. It’s such a gorgeous turquoise. And the green is very close to Monteverde Green. Love them both and I know I will use them in many of my pens.

So that was yesterday, and we did a lot more than shop for ink; I didn’t get her back home until past 6pm and I picked her up at 11am! More details will follow in my post on Wednesday because I’m writing it all down in my journal. 🙂

This morning I was up early (those darling cats of ours!) and I started catching up on my Youtube video subscriptions. The very first video was an update on the progress made in a Wreck This Journal. So I was inspired and for the rest of the morning I worked on mine.

I had so much fun! It was hard to “wreck” a journal in various ways but I managed it and it was great.

I actually did this, although you can’t really tell from the picture. My feet didn’t need to be wiped and they were clean as I was inside so there’s no evidence I jumped on it, but I did. I invited David to do the same but he declined. He laughed watching me do it though! As I said, so much fun.

Yup did what the instructions told me.

This was the last page I completed and I’m really happy with it. I’m feeling the effect of this journal already; much more liberated and free with journaling. Maybe I won’t be so precious with my other “fancy” journals. That’s the aim anyway. I will share more as I progress through the journals.

Hope you had a wonderful weekend!