WordPress tells me six years ago this month, I started this blog, and they sincerely encourage me to continue. That’s nice. I guess I will.

On May 19 I got up super early and stationed myself in front of the tv downstairs. I didn’t want to wake David up, so me and the cats were as quiet as possible, watching the royal wedding unfold. I am a long-time royalist and this was a big deal for me. I remember watching Lady Diana Spencer marry Prince Charles on July 29, 1981, with my mother, in the early hours once again. We did the same for Prince Andrew and Sarah Ferguson on July 23, 1986. And when Prince William married Kate Middleton on April 29, 2011 I was watching, lying prone on the floor, trying to ignore the pain of yet another back episode. This year I was in pain once again because of my back, but luckily this time I was able to sit in a chair, table in front of me, drinking tea and writing in my Franklin Christoph journal with a new fountain pen, a Jinhao 140 from the Birmingham Pen Company. As I watched beautiful people in beautiful outfits amid  beautiful flowers in St. George’s Chapel I wrote my thoughts (loved the Most Reverend Michael Curry’s sermon!!) and wishes for the new couple (love and laughter always).

The pens I used during the wedding came to me from The Birmingham Pen Company. I’m a sucker for a gift set (Lamy gift set, Parker gift set) so when I saw the Starter Pack Gift Set, Jinhao 140 Shell Diamond I couldn’t resist. I’m on a bit of a Jinhao roll I guess but I love them.

I’ve been trying to remember when I first heard about or stumbled upon the Birmingham Pen Company and I can’t. It must have been a youtube video or another blogger but whatever, I subscribed to their newsletter and now I regularly get tempted by their offerings. I am in love with their Model-A Fountain Pen in Jurassic Amber; they are turned by the man behind the Birmingham Pen Company, Nick, and his father, and they sell out as soon as any are in stock.

Anyway the Jinhao 140 set arrived, in beautiful packaging. In addition to the pen I received five paperclips in the shape of nibs (so cute), two converters, a small notebook of Tomoe River paper, a faux leather box and a free bottle of Birmingham Pen Company ink (I chose Waterfront Dusk because I liked the name). 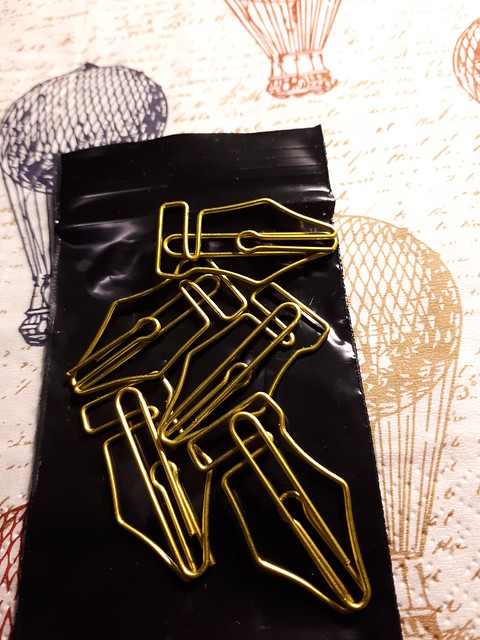 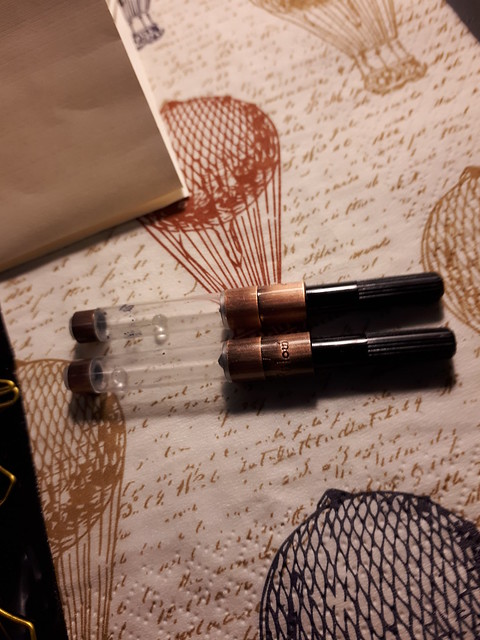 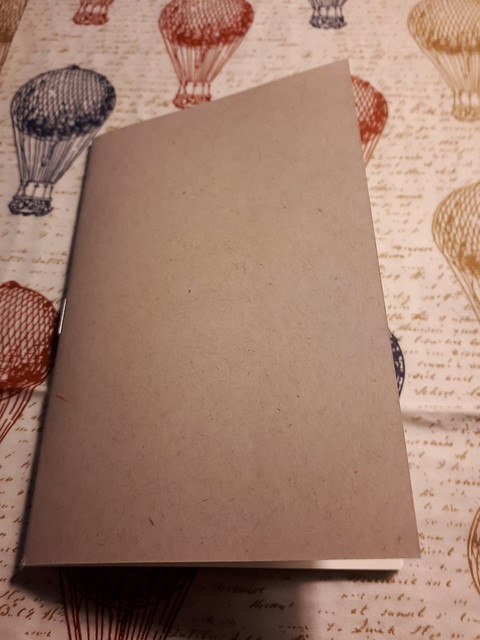 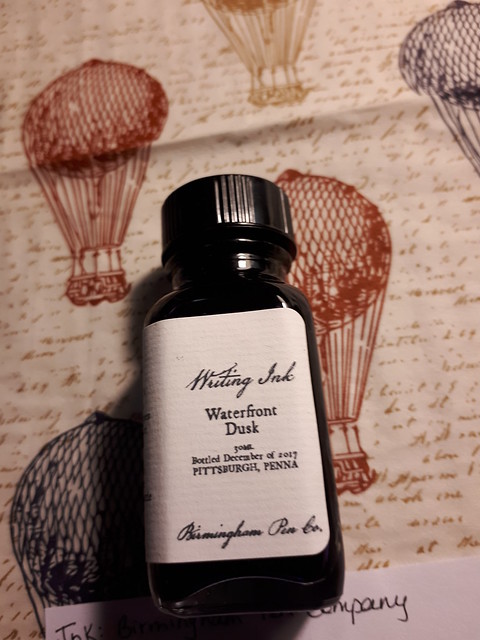 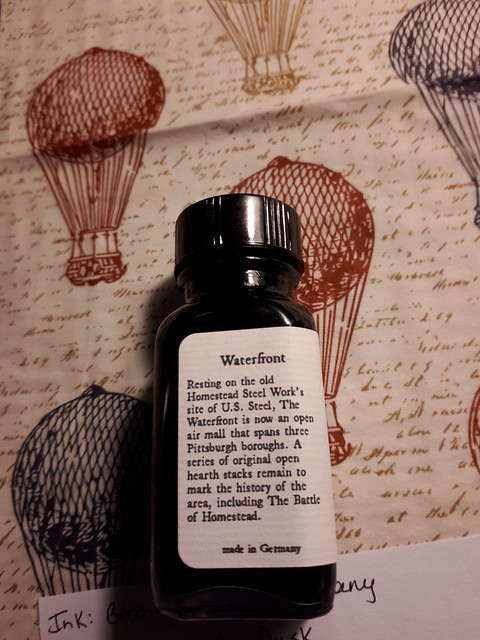 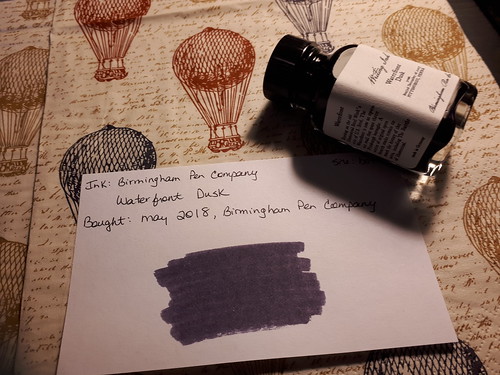 The ink is more blue than what is showing in the photo.

The company is based in Pittsburgh, Pennsylvania, and all of their inks (there are 40 to choose from) are named after unique events in the history of Pittsburgh and surrounding areas. The ink comes in 30 mL ($7.99) and 60 mL ($11.99). The free bottles are 30 mL.

I also received a personalized note signed by Nick himself, thanking me for my first order from his shop and for giving him the opportunity to earn my business. He described how he does “everything from packing orders and answering emails to filling the ink bottles. My site has been operating for about a year and a half, and I still get excited to watch each order come through.” I’m sure he’s a busy guy but taking the time to write that note meant a lot to me. He ended the note by asking me to let him know “if there’s anything I can do for you in the meantime.” Unfortunately I had to take him up on his offer. Everything in the package was intact and exactly as advertised, except for the pen.

I couldn’t open it.

I tried to be gentle, then I tried being rough. I had some co-workers try (it was sent to my office). Nothing worked. Because of the design of the pen at first I wasn’t sure which end opened, but I did a little research and realized we were doing everything right to gain access to the converter. In desperation I sent Nick an email describing my embarrassing situation. I couldn’t believe how stubborn this little pen was proving to be. 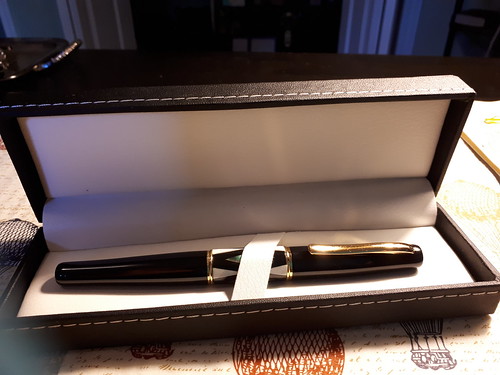 Two days later I received an order confirmation from the Birmingham Pen Company. It was for a Jinhao 140 and a 30 mL bottle of ink. Cost was zero. Shipping was zero. Then I received an email from Nick, apologizing for the uncooperative pen and letting me know a replacement had already been dispatched to me, inspected by him, free of charge, with another bottle of free ink, with no expectation of return of the first pen. We exchanged emails to the effect of: You sure? followed by Absolutely! I was delighted and stunned by his generosity. Even when I told him I had managed to get it open, he still insisted I did not have to return it (a co-worker gingerly took the pen in her specialized work gloves and, after asking my permission, really leaned into the twist and finally coaxed the pen to open up, amid cheers from workmates. She is my hero). About a week later I had a second Diamond Shell (which opened like a dream) and a second bottle of free ink. Exceptional customer service. And I’m not the only one who thinks so; I googled the company and found half a dozen testimonials on Fountain Pen Network alone attesting to Nick’s commitment to customer satisfaction. I will definitely be buying from Nick again. 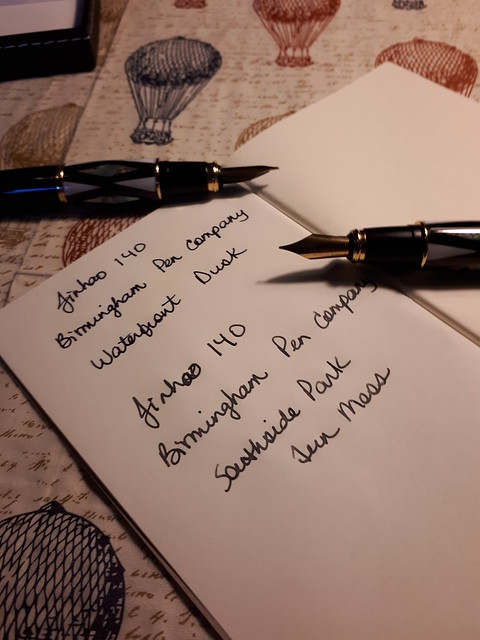 The second bottle of ink is Southside Park Fern Moss. It’s hard to tell the difference between the two inks but the Fern Moss is a deep grey-green. 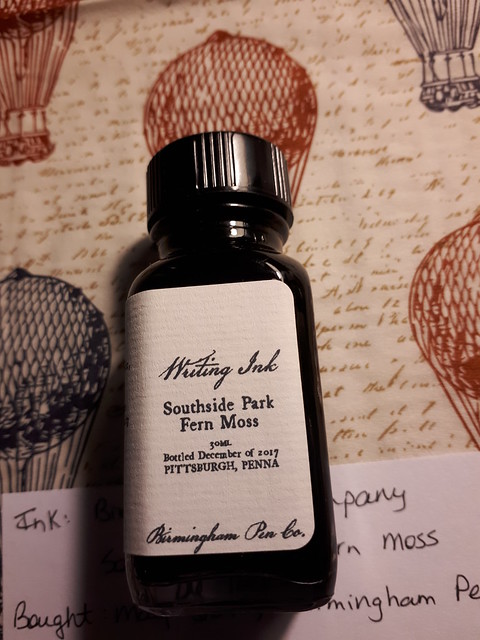 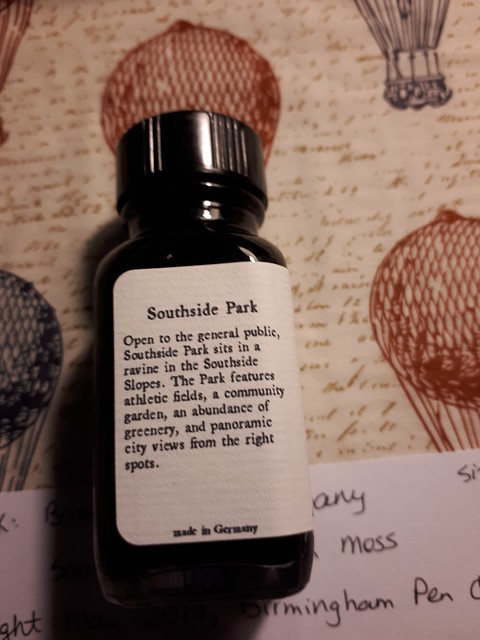 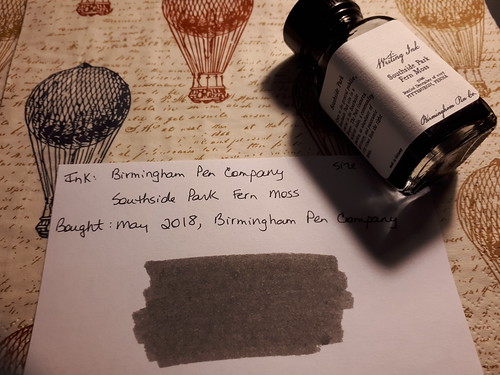 The ink dries more grey than green and I really like it.

I was thrilled with the customer service and how it all turned out, but there was one weird thing: for both pens, the converter that it shipped with did not work. I tried repeatedly to get the converter to suck up some ink but nothing worked. So I used the extra converters and they worked perfectly. All’s well that ends well. 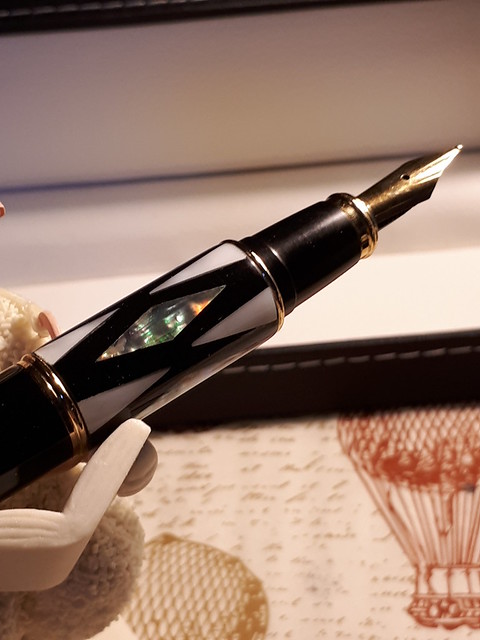 The pen is quite different from the other Jinhaos I’ve seen; that was one of the reasons I bought it. The inlaid shell catches the light with shades of green and yellow. The nib is considered fine but writes more like a fine medium. 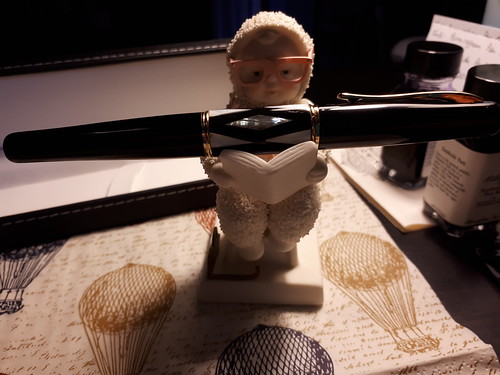 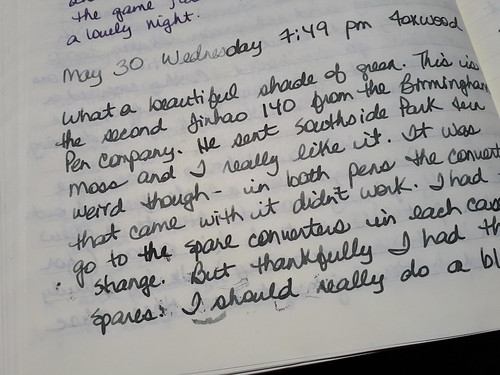 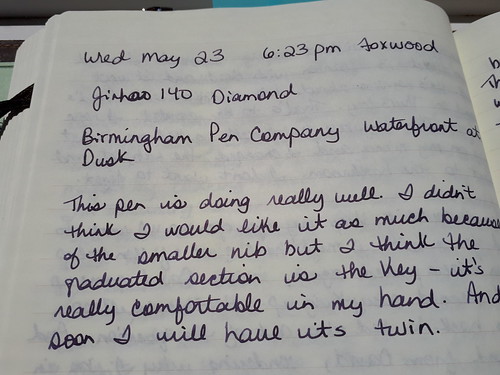 It’s very comfortable in the hand and the nibs are super smooth. The graduated section is not as awkward as I first thought. I’m very, very happy with my new purchases.